Ivy is the tritagonist in cats and dogs 1 , she is first seen after the ninjas try to kill Lou, Lou finds Ivy in a trash can and Ivy had her suspicions. Lou was making sure that this dog wasn't bad like cats. Ivy soon leaves and tells the beagle her name as she walks away. She is seen later talking to Butch and tells her to stay away from Lou but through out the film , Ivy always tries to help Lou in defeating Mr tinkles. Now for some reason she does not appear in the movie sequel, Cats and dogs 2: revenge of kitty galore. It is possible that she still works at D.O.G.S HQ.Please tell Susan Sarandon to reprise her role as Ivy in Cats & Dogs 3. 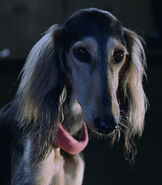 Add a photo to this gallery
Retrieved from "https://catsanddogs.fandom.com/wiki/Ivy_the_black_white_dog?oldid=7405"
Community content is available under CC-BY-SA unless otherwise noted.