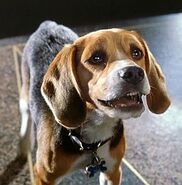 Add a photo to this gallery
Lou is the main protagonist of Cats & Dogs and supporting character in its sequel. He is a beagle who is the head of D.O.G. HQ, even though he refused to be an agent at the end of the first film when he was still a puppy.

Lou first appears as a puppy along with other beagle puppies in a farm. While all the other puppies seek a comfortable home, Lou seeked adventure. Lou tries to jump out the window but fails, and his Lou's siblings laugh. Soon, D.O.G. sends in agents to get a home after recieving the news the Brody family was adopting a puppy there.

When Lou was picked due to a mistake, Butch was sent to train him and partner with him.

In the end, at a Christmas tree factory, he defeated Tinkles and chose his family over being an agent. Surprisingly, he appears as leader of D.O.G. in the second film.

Lou has become head of D.O.G. and wears an office uniform for dogs. He also has a mate.

Retrieved from "https://catsanddogs.fandom.com/wiki/Lou?oldid=7443"
Community content is available under CC-BY-SA unless otherwise noted.